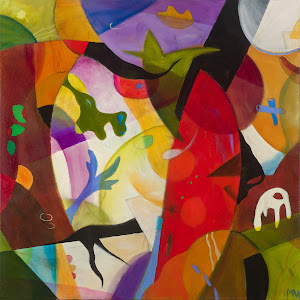 Playground of the Gods

After the last tear was shed I became empty. The darkness of life opened up to day, and swept away the clouds. Soon the earth became a playground, the playground of Gods, of spirits, of persons dead so long ago. A playground of the living as well, borrowing what time they have from the future, which holds no promises except for an ending. At that time the Gods will go home, and take their angels with them.

The Jaws of January 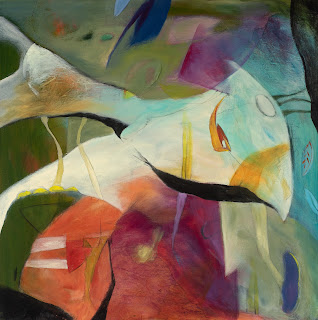 So here we are. The jaws of January loom ahead, open and prepared to consume our last shred of sanity. The holidays plus the pandemic are evil siblings. On a dark day I composed a prayer.

Holy Spirit. Are you turning your face from me? Am I too full of faults for you to listen to my pleas? Is it true, that you only take in the devout? The prayerful? The righteous, and refuse the pleas of the sinful, the weak, and the ones full of faults? So where do we go, who are alone and seeking solace and strength, if you do not heed the prayers of those imperfect beings? Is it really true that you play favorites? Sometimes I think they are right, those who consider suffering to be a punishment for some undesired act. The Bible says that God looks out for the little sparrow. But I have not found this to be true. 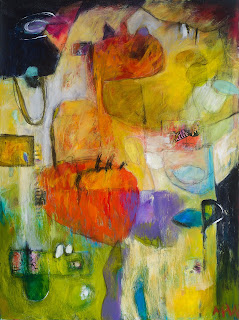 Sometimes when I admire the work of an extraordinary artist I imagine that out of their fingertips beauty flies, unimpeded onto the canvas. The colors are perfect, the shapes know their places, as if they had practiced it all on some other dimension, and now the time has come for it all to make itself know. It is similar to when we watch a dancer on the stage whose movements appear so effortless you almost think they never have to work at it. Their bodies obey every command that their souls suggest.

I still think some artists just have a gift of vision and color such that beautiful paintings roll off their brushes as  easily as honey off a spoon. Not me. I have to coax it out, pull it out, cover it up, start again, throw the brush across the room. And maybe, maybe, I will get something that works. The painting above is called "Herbst", names for a piece of text lifted from a German book of posters. It may have 2, 3, even 4 paintings underneath. And I still have doubts.
Posted by paula at 12:47 PM No comments: 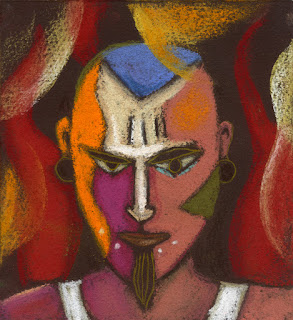 When the world of abstracts has shut its doors to me, meaning I fail to coax a painting out of a canvas, I turn to faces. Somehow they never fail me. A few months ago I had a show in my studio called "Say My Name". I invited guests to put names to the 30+ portraits I had on my walls. People had fun. But I couldn't call it a success in terms of sales. I am not sure why, but it is very difficult for me to sell a face. Do people not want that presence in their homes? Do they have to know the individual for them to invite them in? At least in this area the anonymous nature of a landscape seems to please everyone. It's comforting. Beautiful. Unchallenging. But my portraits become my friends. This guy was on a postcard advertising a tattoo and piercing parlor in London. He is my Camden Market Man. 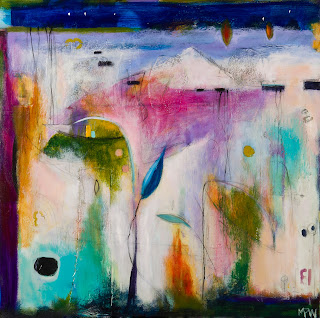 It has been quite a while since my last post. 4 years, exactly! I had been a prolific writer in the years between 2008 and 2013. There was a lot of pain I had to work through. I feel as if I have journeyed through a dark tunnel and come out into a world with a ceiling of clouds that often part to open upon blue sky. Better than before. Going forward.
Posted by paula at 9:30 AM No comments: 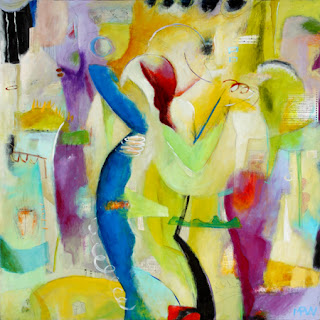 This year Valentine's Day opens to a snowing scene, the beauty of winter still with us. I can hear a dove cooing outside. Jamie and I used to call each other "love dove". But I'm not feeling sentimental or sad today. I have had 4 years to observe my society of friends and family and how they react to my still single situation. For the first year I had a reprieve. And then gradually it started. "Oh, you really need a man." "We need to fix you up with someone". And the crueler missives from the family. "Do you and Muriel play bridge together? How about Elder Hostel? Too bad you're not older, you could get some old guy who just wants you to boil him a egg. Want to join my writer's group? (average age: 85)". I have cut off communication from most of the meannies, but unfortunately, I have to stay nice to the old lady, my mother in law, who begins or ends every conversation with "How's your love life, or Have you got a fella yet?"
I have become keenly aware of several things in the last several years. One reason people are disparate to pair up in this society is that it gives the individual value. To be in a couple, to be in a marriage, or a relationship is to say to the world, "Look, I have worth. Someone chose me. There is actually another human being on the planet that can take my bad habits and idiosyncracies and still love me." This is particularly true of women but I suspect it is also true of men. People want to have worth. They want to mean something on this planet. So we couple up and go forth, walking among the other couples who are like us, who have value, credibility. Couples become smug. They hear of the death of a friend's spouse and hold each other tighter. "Thank God that didn't happen to us.." They pay their respects, and slip back into their cars, in their appointed places, and go home, and shut the door, open up some wine, and find the remote.  Duty done. After an obligatory lunch date, back to the couples world where everything is safe, and they ignore that ghost at the door. The inevitable boulder that will drop on one of them no matter what they do to forestall it.
When I was little, my parents would play a record for me called "Classics for Children." One of my favorites was Diana and the Golden Apples. It told the story (to Prokofiev Lt. Kije), of Diana who was the fastest runner in ancient Greece. Melanion wanted to marry her and could only do it if he beat her in a race. The race started and Melanion threw down golden apples in her path, which she scooped up. They slowed her down and Melanion won the race and won Diana.
I would have kept running.

January. A cold and cursed month. It has the leftover regrets from the previous year, like the half empty boxes of Christmas candy you are ready to toss. I look out to the woods to see beauty, and, yes, its there, but it is also January so that beauty turns bleak and frosty. I can see why people choose to exit this life in this month, as there is little to comfort a person who already has a vision forming of the next world. 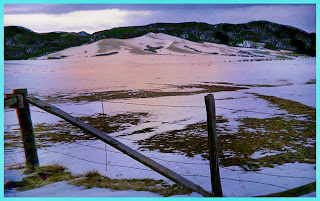 It's a month to turn inward, for good or for bad, to catch up on writing, on reading, while the bottles seem to crane their necks out of the recycling bin. One has to work hard to prevent the downward spiral. Gather friends for homemade soup, meet for movies. Plan a trip to sunshine. I want to remember all the people that January has killed as my feet are in the warm sand of the south.
Posted by paula at 4:49 AM No comments: